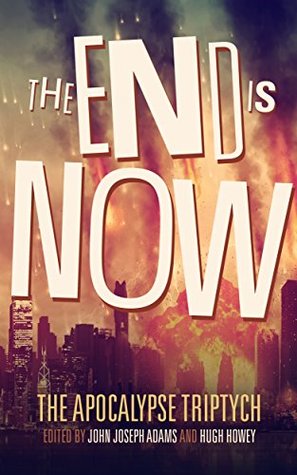 Famine. Death. War. Pestilence. These are the harbingers of the biblical apocalypse, of the End of the World. In science fiction, the end is triggered by less figurative means: nuclear holocaust, biological warfare/pandemic, ecological disaster, or cosmological cataclysm.

But before any catastrophe, there are people who see it coming. During, there are heroes who fight against it. And after, there are the survivors who persevere and try to rebuild.

THE APOCALYPSE TRIPTYCH will tell their stories.

table of contents:
INTRODUCTION by John Joseph Adams
HERD IMMUNITY by Tananarive Due
THE SIXTH DAY OF DEER CAMP by Scott Sigler
GOODNIGHT STARS by Annie Bellet
ROCK MANNING CAN’T HEAR YOU by Charlie Jane Anders
FRUITING BODIES by Seanan McGuire
BLACK MONDAY by Sarah Langan
ANGELS OF THE APOCALYPSE by Nancy Kress
AGENT ISOLATED by David Wellington
THE GODS WILL NOT BE SLAIN by Ken Liu
YOU’VE NEVER SEEN EVERYTHING by Elizabeth Bear
BRING THEM DOWN by Ben H. Winters
TWILIGHT OF THE MUSIC MACHINES by Megan Arkenberg
SUNSET HOLLOW by Jonathan Maberry
PENANCE by Jake Kerr
AVTOMAT by Daniel H. Wilson
DANCING WITH BATGIRL IN THE LAND OF NOD by Will McIntosh
BY THE HAIR OF THE MOON by Jamie Ford
TO WRESTLE NOT AGAINST FLESH AND BLOOD by Desirina Boskovich
IN THE MOUNTAIN by Hugh Howey
DEAR JOHN by Robin Wasserman